The Lansdowne Folk Club is pleased to announce our 30th Year Fundraiser!

The event will be held on April 1, 2023 at the 20th Century Club beginning at 7pm.  We will be hosting 3 great acts as well as an open mic on 2 stages!  We will also be providing complimentary (non-alcoholic) beverages, snacks and desserts. There will be a silent auction for goods and services provided by local artists and businesses, as well as raffles and special guests!  Tickets are only a $30 donation per attendee.  As always, the event is also BYO (food and drink)!  Please click here to order tickets through PayPal (accepts debit/credit cards as well as PayPal accounts).  We can also accept payment at the door by cash or check only.

Here is the lineup so far (please keep checking back for updates as we finalize the event): 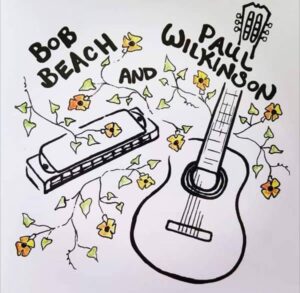 Bob Beach plays harmonica with calm fierceness. A mouth-harp maestro who swaggers into a solo like The Marlboro Man, then quietly leaves the set while the rest of us wonder what just happened and how such a tiny instrument could possibly sound like that. Bob has been a working professional musician for 50 years, bringing harmonica, flute, and vocals to a broad scope of genres. As a sideman, he has recorded or performed with national acts such as; Ollabelle, Langhorne Slim, The Avett Brothers, Pat Wictor, Sean Mullins, Kim Richey, Lizanne Knott and many more.

For the past fifteen years, Paul Wilkinson has been a member of the Philadelphia roots rock mainstays, Mason Porter and performs with The Chester County Blues Band, The Rolling Thunder Blues Revue, Pocono Jones & The Bear, & It’s About the People! The latter features Glenn Ferracone on drums, Luke Ferracone on guitar, and Paul Klinefelter on bass. “They are all monster players and have pushed me to the next level to keep up,” says Wilkinson. Bob and Paul combine to create Clever Covers of 20th and 21st Century Roots Music. Find out more about them at https://m.facebook.com/bobandpaul/events/?ref=page_internal&mt_nav=0.

3rowback is a band based in Havertown, Pennsylvania and is made up of Jeni Englund, Dave Kiefer, & Teri Brown.
From basement juke box sing-alongs to classical vocal training, Jeni Englund grew up with music in her blood. After saving up money modeling in Japan, Italy and the states, she was able to move from Wisconsin to New York City to study musical theatre. This led to performances in off-Broadway and Cabaret shows. Craving more control over her content, she started her own folk-rock band and found her path as a singer/songwriter, gigged across Europe and the States, recorded several albums and now teaches music to students in Havertown and virtually across Pennsylvania.

Dave Kiefer started writing songs for his rock band “The Scouts” and with college radio airplay gained a substantial Midwest following. All that fun led to a publishing deal on music row in Nashville, where he had the good fortune to manage a studio and co-write with some of the best in the business. He then landed a house gig in Tokyo that turned into exciting long run performances in Seoul, Hong Kong and Shanghai-to name a few. Now, where else but Philly to put down some roots and create cool music!

Originally from rural Missouri, Teri Brown has called Havertown her home since 2012. Her musical style is heavily influenced by the pop, country, folk, alternative, and adult contemporary music she grew up with in the 80s and 90s. She began writing and recording music in 2002 from her home studio, collaborating with producers all around the world and across many genres. Teri’s soulful vocals complement her songwriting skills, blending catchy hooks with clever, relatable lyrics. Check out the band at https://3rowback.com.

Musicians interested in playing 2 songs at the April 1st open mic portion of the event, please contact Bob at bob@bobbeach.net.